Dating from the 1400’s Chester’s Winter Watch Parade was held at Christmas. The City leaders would hand over the keys to the City to the City Watch (early police force) after processing around the City to ensure it was secure. There followed a banquet and celebration of Christmas, knowing the City was safe.

The Winter Watch Parade was re-created by the Council in the 1990’s. Unlike the Midsummer Watch that was re-created following the details in the City archives, the Winter Watch has been turned into a fun parade in the lead up to Christmas. Using some of the characters from the Summer Watch, this is a smaller evening parade. The cast of characters changes slightly but generally consists of- 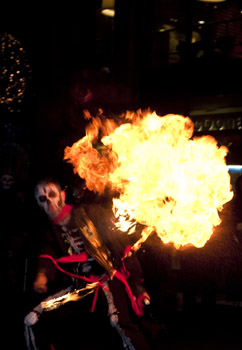 n addition the parade has added a spectacular fire breathing finale, with the Chester Re-enactment group joining as the Chester Watch and a group of giant skeletons, Roman Tours have also joined adding the Midsummer Watch Chariot and a skeleton Emperor .

The Parade starts at 7pm, from the Forum Shopping Centre. The parade continues around the City centre including St Werburgh Street, Northgate Street and Bridge Street. There are performances including dance, fire breathing and sword fights in Eastgate Street outside Brown’s of Chester and in the Town Hall Square. 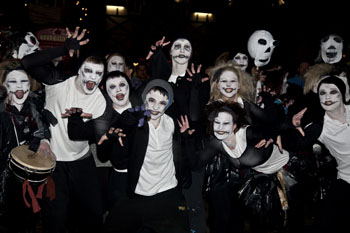